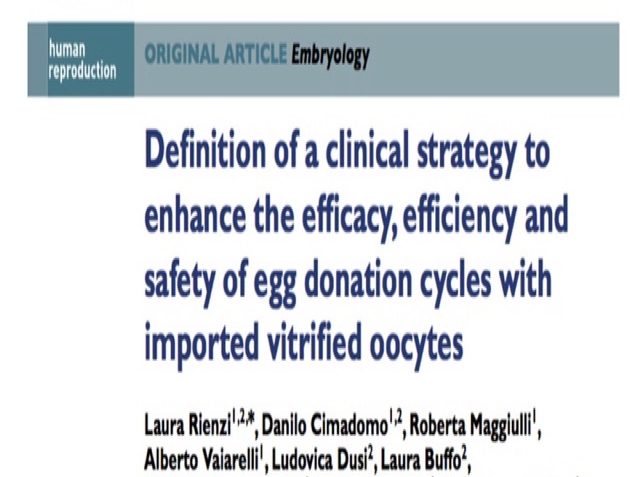 17 Gen Definition of a clinical strategy to enhance the e cacy, e ciency and safety of egg donation cycles with imported vitrified oocytes

Definition of a clinical strategy to enhance the e cacy, e ciency and safety of egg donation cycles with imported vitrified oocytes

STUDY QUESTION: Which is the most suitable clinical strategy in egg donation IVF cycles conducted with imported donated vitrified oocytes?

SUMMARY ANSWER: The importation, and allocation, of at least eight vitrified eggs per couple during an egg donation cycle is associated with a high cumulative live birth delivery rate per cycle, as well as the confident adoption of a single blastocyst transfer strategy to minimize the risk of multiple pregnancies.

WHAT IS KNOWN ALREADY: IVF using donor eggs is commonly used worldwide to treat women who are unable to conceive with their own oocytes. In 2014, the Constitutional Court (n.162/2014) gave permission for gamete donation to be allowed for ART in Italy. Initially recommended as a therapeutic approach for premature ovarian insu ciency, the use of donated oocytes has become more and more common. In countries such as Italy, fresh oocyte donation is theoretically possible, but practically impossible due to the lack of donors. In fact, the Italian law does not allow reimbursement to the young women, who can only voluntarily donate their eggs. Therefore, Italian IVF centers have established several collaborations with international oocyte cryo-banks. The most popular workflow involves the importation of donated oocytes that have been vitrified. However, recent evidence has questioned the overall e cacy of such an approach. This is because detrimental e ects arising from oocyte vitrification and warming might reduce the number of eggs available for insemination, with a consequential reduction in the achievable live birth rate per cycle.

PARTICIPANTS/MATERIALS, SETTING, METHODS: We performed an overall analysis, as well as several sub-analyses clustering the data according to the year of treatment (2015–2016, 2017 or 2018), the number of warmed (6, 7, 8 or 9) and surviving oocytes (≤4, 5, 6, 7, 8 or 9) and the cycle strategy adopted (cleavage stage embryo transfer and vitrification, cleavage stage embryo transfer and blastocyst vitrification, blastocyst stage embryo transfer and vitrification). This study aimed to create a workflow to maximize IVF e cacy, e ciency, and safety, during egg donation cycles with imported vitrified oocytes. The primary outcome was the cumulative live birth delivery rate among completed cycles (i.e. cycles where at least a delivery of a live birth was achieved, or no embryo was produced/left to transfer). All cycles, along with their embryological, obstetric and neonatal outcomes, were registered and inspected.

LIMITATIONS, REASONS FOR CAUTION: This retrospective study should now be confirmed across several IVF centers and with a greater sample size in order to improve the accuracy of the sub-analyses.

WIDER IMPLICATIONS OF THE FINDINGS: Single blastocyst transfer is the most suitable approach to achieve high success rates per procedure, thereby also limiting the obstetric complications that arise from twin pregnancies in oocyte donation programs. In this regard, the larger the cohort of imported donated vitrified oocytes, the more e cient the management of each cycle.